It’s a bad day to be (Belgian) waffles on Twitter 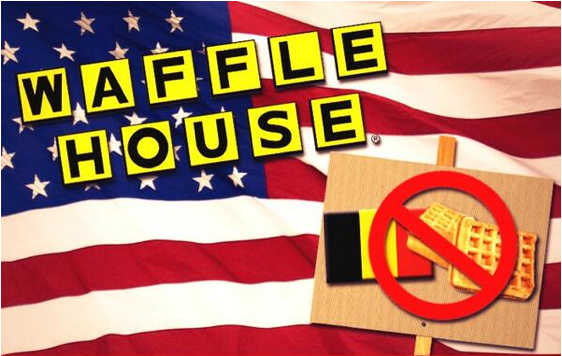 Ah, Belgium. The tiny sliver of land in Europe’s Low Countries region is home to just about the only nationality that it’s acceptable — encouraged, even! — to openly mock.

As such, Twitter was abuzz with cheeky anti-Belgian sentiment today in the run up to the country’s World Cup match against the U.S. team. An easy target for its historic affiliation with the Belgian waffle, the country was targeted by brands eager to cash in on some cheap pro-American fútbol sentiment.

National icon Waffle House, perhaps walking the hardest line of any brand out there today, was sure to make clear where its loyalties lie — while still shilling its baked goods.

Southeastern (America!) chicken and biscuit chain Bojangles, meanwhile, doubled down on the patriotic imagery with an image that, frankly, has us craving a nice light salad.

And true-blue Chobani didn’t mince its words either.

Republican Texas Sen. Ted Cruz poured on the jingoism like so much maple syrup with this winking reference to the bad old days of Congressional Freedom Fries.

Finally IHOP, which despite its internationalist trappings is as American as you get,  shoots and scores with its sly and sublte tweet.

Pancakes for the win.