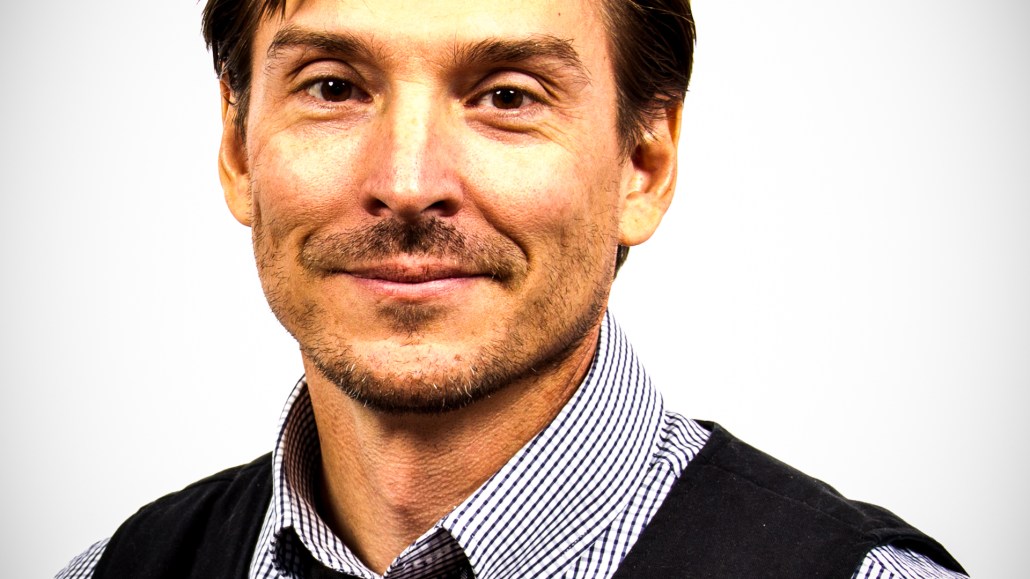 It’s been over three and a half years since Alex Bogusky moved on from leading Crispin Porter + Bogusky. In the years since, he has dabbled in everything from live Webcasting to consumer advocacy to social branding.

Now, Bogusky is spending the biggest chunk of his time building Skoop, an organic food company. He’s also part of a new media and technology accelerator, Boomtown, which is premised on Bogusky’s belief that media and marketing will continue to mutate. With the backing of Faramore Capital Group, Bogusky and his three co-founders will lead startups through a 12-week process of incubating their ideas into viable products.

“It’s really about this democratization of media,” Bogusky said of his new venture. “That’s going to happen in a lot of surprising ways.”

Bogusky spoke to Digiday about what he saw of the Super Bowl, the outlook for the media and advertising worlds, and why he was a growth hacker before the term was a term. The following has been lightly edited for clarity and condensed.

I know you were rooting for the Broncos, so did you see the whole game?
I stopped watching in the third quarter.

Any favorite ads?
I thought the Doritos time machine thing was funny. I didn’t see the Bud one that had a horse and a dog, I think.

Do you miss the thrill as a creative director seeing your spot at the Super Bowl?
No, I didn’t care when I did. The Super Bowl is a funny place for advertising. It’s like making a funny film. Some [brands] are in a position to do that, like Bud or Doritos, but a lot of others aren’t. I like advertising, but the Super Bowl is one of the places where people waste a ton of money.

What’s taking the majority of your time?
I spend most of my time on Scoop. It’s a superfoods brand. For me, the thing is I haven’t participated on the actual product side. All agency people have that desire to get more on that side. There’s rarely anything physical about [advertising] work. I’m enjoying dealing with everything from the packaging to hiring.

What’s the most surprising thing about being on the product side?
The most surprising thing is I don’t have ADD as bad as I thought I did. I thought it would be hard to focus. I thought I was designed for 15 minutes at a time. Your job as creative director is you think in 15-minute chunks. You have at least 10 clients. Now, I don’t mind going in and thinking of just one company all day.

What’s the idea behind the accelerator?
If you look at the industry, advertising dollars are up, and agency fees are down. That’s forcing the raw material of people out of agencies into startups or on the company side. It’s a tough transition. For a lot of people it means you’re fired. At the same time, you see the large holding companies talking about big data and finding innovation. It’s a neat opportunity to create a media- and ad tech-focused accelerator to harness both of those energies. The industry is contracting — the old version is contracting. More money is being spent, but where it’s going isn’t the same old places. That contraction means people with great ideas are being forced into a situation where they’re going to be going for it. There’s also energy in the big holding companies realizing they need to become nimble and get in on what’s next.

Sounds like ad agencies will get smaller.
You can look at it as taking friction out of the system and democratizing the tools. How many small businesses are out there? Facebook keeps surprising people, quarter after quarter. It’s not because of Coca-Cola. It’s every small business in America is advertising on Facebook. You’ll see that become more sophisticated. That’s going to mean the old version [of advertising] won’t support all those people. Where are all those people going to go?

What type of ideas are you looking for?
It’s not a narrow focus. Twitter would have fit. A lot of people have come to me with ideas they’d like me to look at as an invest or adviser. One of the things it does is put a process around that. It can be a little less random and offer the most help and bring in other smart people to help too. Many years ago, Twitter was in [CP+B] explaining what it was about. Not long after that we did [Best Buy’s] Twelpforce. I’ve always really enjoyed the space. Vine would have been a great fit. But there’s also b-to-b things like SpotXchange. [Bogusky is an investor in the programmatic video ad company.]

What does your advertising background bring to startups?
If it was just me, it wouldn’t be a good idea. We have tech partners and mentors from sales and operations. The marketing is something that most startups realize is important but can’t afford it. That’s where you get phrases like growth hacking. I worked in advertising but the best work we did wasn’t buying media, it was designing aspects of companies so they could market themselves. Growth hacking is a way to say the same thing. It’s building customer acquisition into the business.