Why agency people are so unhappy 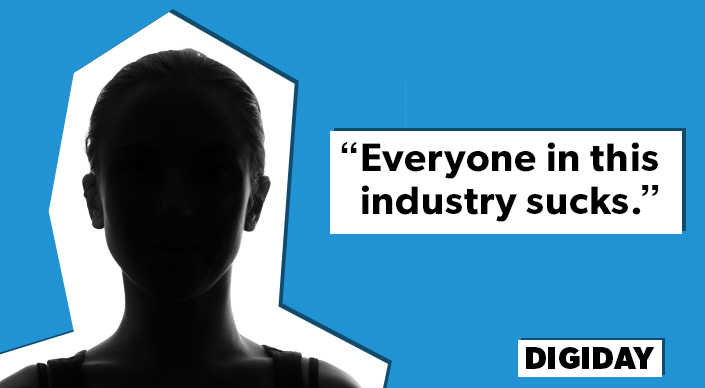 “It’d be a great business if there weren’t any clients.”

“I can’t think of a single person who loves their job.”

“Everyone in this industry sucks.”

If you work in the agency world, chances are you’ve heard any or all of these things. Maybe you’ve even said one of them yourself, after a few glasses of vino.

Negativity, after all, isn’t new in agencies: You only need to take a stroll around the comments sections of any trade publication’s site — this one included — to figure that out. But lately, it seems like agency people are getting increasingly grumpy.

One agency president describes it as an air of “pessimism” that pervades the entire industry that has gotten worse. “The problem is that we haven’t spent enough time developing any culture,” he said.

Andrew Benett, global CEO of Havas Worldwide puts it this way: For organizations whose biggest capital is people, agencies don’t spend a lot of time thinking about how to make people happy.

Decreasing job satisfaction levels and general unhappiness are not unique to agencies. Ever since the recession, satisfaction rates have been declining steadily. But there seems to be certain systemic problems that make the malaise worse in adland. “The agency world is hyper-competitive because everyone’s fighting for the same thing,” said Andrew Wefald, a professor at Kansas State specializing in job satisfaction issues.

Wefald said that more often than not, pay is not the primary driver of job satisfaction — co-workers, leadership, management and the work itself are more likely to be the major causes. But sometimes it just boils down to attitude. “There is research to suggest that there is a dispositional aspect to job satisfaction, meaning it’s trait-related or part of your personality,” he said.

And if there is a lot of criticism coming your way, then people get unhappy in their jobs, he said. And — between awards shows, comments on social media, and the hundreds of thousands of armchair ad reviewers — ad industry veterans are nothing if not conversant in criticism. “People just don’t like to get so much negative feedback,” said Wefald.

Just ask Uwe Hook. In June the client director at media agency Initiative left his job, ending a 20-year agency career. He didn’t go quietly. Uwe wrote a Dear John letter on Medium about his decision. It read, in part:

“Not one person questioned my decision. Everybody expressed the urgent desire to leave the agency world as soon as humanly possible. No matter who you ask, almost everybody is ready to walk away. This ‘get-out-while-you-can’ sentiment is prevalent.”

Fear is the problem, Hook told Digiday. Fear of what clients want, fear of not achieving results.

“It’s not fun any more,” he said. “We all used to come up with innovative ideas, but now we don’t. The bravery in work has disappeared.” Agency frustration at procurement departments that drive prices down is one culprit. Another is the constant need for results. “Innovative work is cut immediately because you don’t know how it’s going to perform,” said Hook. “So you just repeat what you did last year. It wasn’t this way always.”

Agencies, being in the business that they are, often find that their destinies are intertwined with their clients. There’s a “general lack of control,” said Beth Rilee-Kelley, chief operating officer at The Martin Agency.  “You can be swimming along and thinking things are great, and then you get a surprise from a client,” she said. “What it does is put your life into a tailspin.” A survey from The Creative Group reflected the dissatisfaction in agencies. It found, for example, that a majority of agency employees worked 10- to 12-hour days, above the national average.

The fact is, advertising is an industry in flux. Seismic technological shifts are continuing to have aftershocks at the agency level — and likely will for years. Television spots pre-Internet yielded high margins, lots of free time and lots of free lunches, said James Cooper, head of creative at BetaWorks. But today, clients demand digital and more of it. Agencies don’t just create one television spot, but multiple YouTube videos. There is just more work: “Some people remember that time and feel incredibly bitter than it’s been snatched away from them,” said Cooper.

And the people in charge of creating culture — the agency executives — are often the ones running scared. “It’s really hard to create a winning culture if you are not 100 percent vested in it,” said Cooper.

There is, however, light at the end of the tunnel. For its part, agency 72andSunny has created a position called “director of culture and coaching.” Cyndi Yee, the first to hold the job, is an agency vet now responsible for ensuring cultural happiness and mental health of the shop’s employees.

Yee said one problem is that most places aren’t creating a “sustainable” working environment that takes into account how the business has changed. “Tech companies have led the way with unlimited vacations and good environments, but we haven’t caught up.” The negativity has reached epic proportions because there is a “perfect storm” happening — increased pace of business, more pressure from clients, price pressures and an overall feeling of “tiredness,” said Yee.

And then, there are the egos. Dan LaCivita, president at Firstborn, says people are unhappy in agencies because advertising seems to attract egotistical people. “There are difficult people to work with in any industry, but I honestly think our industry as a whole has more than our fair share of assholes,” he said. “The people writing racist, sexist and awful comments on websites are the bottom of the barrel, and they’re employed, which means they’re making a whole bunch of other people miserable too.”

As one agency employee put it, most of the problems come down to maniacal, Type A personalities, “moody creative types” and “bipolar strategists” that are hell-bent on “masochistic perfectionism” and make sure everyone around them is as well.

“We all need therapy,” she said.