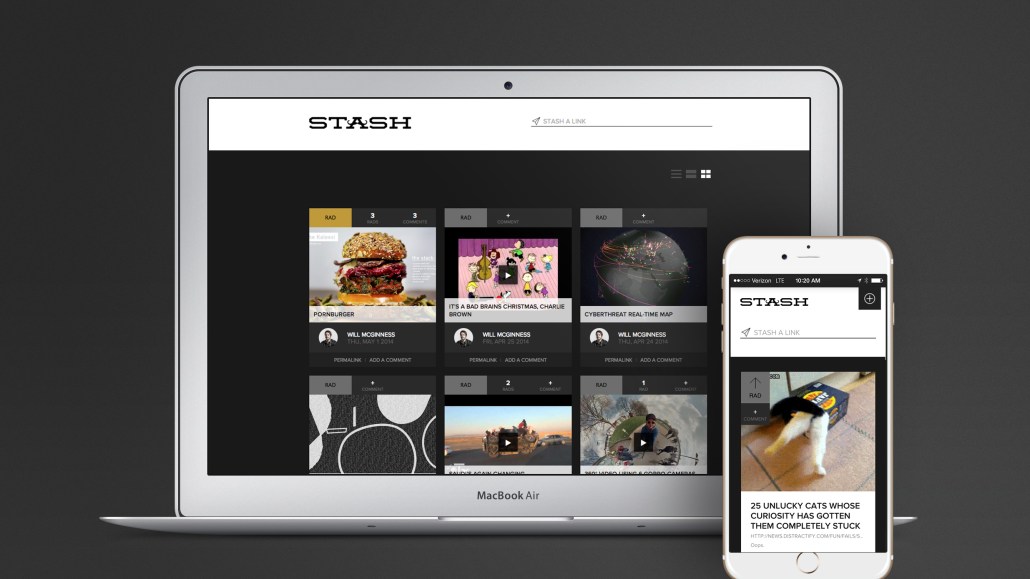 Inspiration can come from anywhere. To make sure their creative departments stay in the loop on what’s new out there, agencies are setting up internal sites and apps that curate the best work from within the shops and from outside, combining those with communication capabilities so employees can comment and share whatever is inspiring them.

Here is a look at four in-house, homegrown tools agencies are using to juice their creative.

For its part, Venables Bell & Partners has developed Stash, an internal, Pinterest-like site that lets users “stash” a link via a bookmarklet. Anyone in the agency can post a link, view a feed of links and leave comments. Posts are tagged so they’re grouped by category, and each user gets a profile so people can see what he or she has stashed.

“Stash was born out of the need to share content during pitches and has evolved into an all-agency inspiration board,” said Will McGinness, ECD at Venables. “Instead of copying the individuals on the pitch and rifling through email chains, the pitch team can just check the pitch feed via the tag, and the agency doesn’t have to worry about the word getting out.

The responsive site works on every screen, and was built by a small, four-person team within Venables. It’s got a neutral palette and a lot of negative space. “By building our own, we could tailor it to meet our specific agency needs or whims,” said McGinness. Bonus: “You can’t automatically put mustaches on everyone’s profile photo in Yammer.”

The agency is still thinking about releasing the IP publicly — but only once it’s perfected. “Ideally, we’d make sure it’s a flawless product, package it up and release it for companies to have their own Stash.”

Seenapse
Former agency veteran Rafael Jimenez recently scored a $150,000 investment from Havas for Seenapse, a new app and website that seeks to make the internal agency brainstorming process a little easier by letting users “connect the dots” between inspirational things they see online. “People come up with ideas by combining ideas,” said Jimenez. “But I was frustrated that there was nothing on the Internet that helped that process.”

The app, which is currently in beta and will be rolled out, at least initially, inside Havas, seeks to go beyond thematic organization into “creative” organization. It lets users search within the platform to see what people associate things with, allowing them to “think with other people’s heads.”

At TBWA, \Magnet is the Omnicom agency’s internal home for what it dubs “metal worthy work.” The brainchild of John Hunt, Rob Schwartz and Peter Souter, the awards-focused site lets you see examples of what has won, and share tips and advice on entering work. “It is meant to encourage, inspire and educate our teams,” said Marianne Stefanowicz, worldwide communications director.

Honey
Perhaps the best-known internal creative tool, Honey was developed at IPG’s Huge Labs. The private social platform is used largely instead of company-wide emails: news, cool work and questions are posted to Honey. Relevant “groups” of people can be tagged, a la Google Plus. The platform has been spun off and is now a functioning startup, with companies including Lyft, Initiative and TMS using it. “As designers and developers, our staff have high expectations for the software that they use, demanding the same usability in the workplace that they’re accustomed to on their favorite apps,” said Huge CEO Aaron Shapiro. “It’s our job to solve business problems for the world’s largest companies, so it just made sense to create a business solution for ourselves.”