Twenty years since its inception, eBay is the go-to e-marketplace for buying, selling and bidding for used goods, rare finds and niche collectibles. As the San Jose company celebrates its two-decade mark this week, it’s looking back on its self-described reign as the “most vibrant and unique” online shopping center.

Over the years since eBay was founded, the items we’ve lusted after has changed with the times. We asked agency creatives to share their most memorable eBay bids from the company’s first 20 years.

Mike Ridley, director of new business, The Community:
The first time I used eBay, I was working for a wealthy film executive in Los Angeles who wanted to get rid of his flat screen for at least $300. While selling his assets was not part of my job description, it being Hollywood, I did as I was told and listed his flat screen on eBay. I was shocked as how quickly the bids came in and was extremely proud of myself for being a savvy salesman. Little did I realize that I did not set a minimum bid for the flat screen, and I ended up selling it for almost nothing. I was terrified that I would be fired, so I ended up telling my boss I got $300 for the flat screen and made up difference with my own money.

Jen Choi, senior social marketing manager, Huge:
I first started bidding on eBay back in 2000, mainly out of frustration at my mom who often went on cleaning sprees that involved throwing out or giving away my toys and stuffed animals. I was 11, and eBay was the most affordable means to slowly rebuild my teddy bear collection with my allowance. While I bid (and won!) a lot back in the day, my mom was ultimately triumphant.

Jason Sperling, executive creative director, RPA:
I bid on a vintage outdoor bench for my home. The price was really good. When it arrived, I realized I had bought a six-inch dollhouse bench. Still get teased about that.

Jennifer Langusch, executive producer, R/GA:
I got the head of a stuffed jackalope on eBay. I saw one in a kid’s store in the West Village, but the taxidermy had made him look a little permanently terrified. I went online to find one looking a little more refined, and eBay bizarrely enough had a very large section of jackalopes. He shipped from California with his antlers taped like a shower cap (see below). 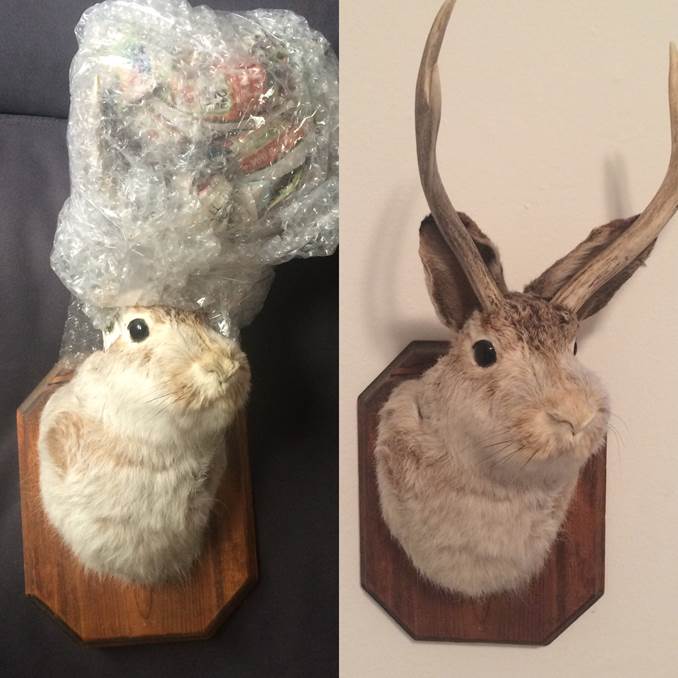 Adrian Buendia, senior recruiter, Huge:
Back in 2004, I overheard a girl who I was friendly with talking about a Saetia record she was selling on eBay. I thought the girl was cute so I went home, hopped on eBay and put in a bid for the record. I ended up winning the record and asked her if I could pick it up personally … and that meeting led to us dating for about three months.

Amanda Schultz, senior producer, Mekanism:
When I was a jerk in college, I stole a parking spot from a guy waiting for it in a mall parking lot. I ran off like a wuss. When I came back, I noticed that he kicked off my side mirror (rightly so). Unfortunately it happened to be a fancy electronic, defroster side mirror. Something worth 200 bucks according to my insurance reimbursement. Instead of going to the local shop, I found the exact same one on ebay for $40. I installed it myself and used the leftover $160 to get a really shitty lower back tattoo.

Anna Boyarsky, director of brand management at Mekanism:
I babysat for 24 hours straight to get enough money to buy my college boyfriend a banjo. He never played it.

Shana Bellot, account director, McKinney:
I remember my first bid. It was a beautiful wall mirror with a gorgeous, antique-looking ornate frame. I couldn’t believe I got it for $5. Turns out the mirror was 2 inches by 2 inches.

David McClay, copywriter, McKinney:
I bought a giant belt buckle with an awesome eagle on it. There was no reserve so I ended up paying only two cents for it. That said, it cost $20 to ship from Canada. It was held up at customs, as it had to be tested for precious metals, and it seemed really suspicious that anyone would want a belt buckle that big, and that it would sell for only two cents. It was suspected as a vehicle for illicit payments, laundering, or smuggling.

Laura Suchoski, social media director, McKinney
I bid on “Pie In The Face” for $200 after this video of an Irish father and son went viral. Unfortunately I didn’t win it, it went for a lot higher — just for a board game!