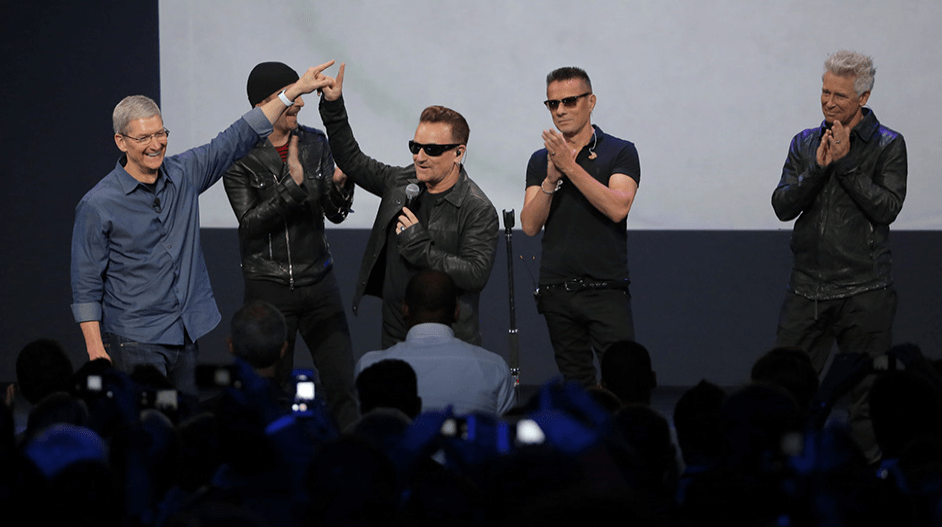 The iPhone maker is surprising iTunes users this week with free copies of “Songs of Innocence,” the latest album from U2. The album, which was announced at Apple’s iPhone event on Tuesday, is appearing in iTunes libraries on both desktop and mobile — with or without users’ permission.

Apple CEO Tim Cook may have called it the “biggest album launch of all time” — and reportedly Apple paid $100 million for the privilege —  but it’s quickly turning into more of a headache. Twitter reactions to the move have ranged from befuddlement to indignation, with some users comparing it to being molested or invaded.

Influential music industry analyst Bob Lefsetz compared the release to “a rape or a murder, but with even less legs.” A bit hysterical, perhaps. But he went on to ask in a post that excoriated the stunt, “Could it be that Bono’s been living too long in the echo chamber, hanging with forty and fiftysomethings who think they rule the world but truly don’t? Yes, older people build the tools, but it’s young people who utilize them.”

The move is especially odd considering Apple is still dealing with the fallout surrounding the iCloud-enabled leak of celebrity photos earlier this month. And while situation showed that the cloud isn’t as secure as people think, this one shows them that it’s technically not even their cloud in the first place.

“When the average person thinks of the cloud as their private space, and all of a sudden this company is messing with their stuff, it makes it clear that that’s not the case at all,” said Chester Wisniewski, security advisor at security firm Sophos. 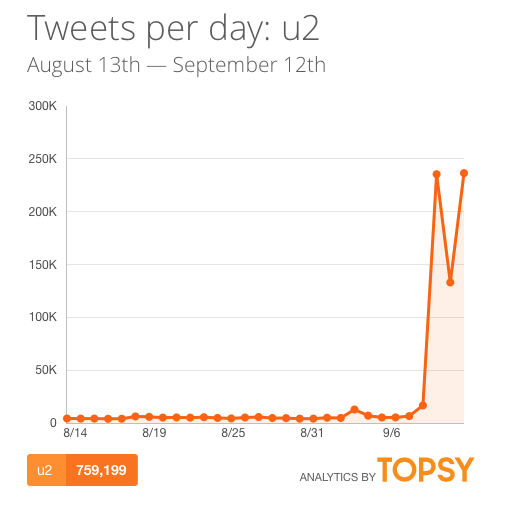 Wisniewski said that move feels distinctly off-brand for Apple, which has largely avoided the temptation of flooding its devices with unwanted software from third-party vendors. “Avoiding crapware is why so many people go with Apple in the first place,” he said.

The move, however, may in the end turn out to be a marketing coup. Despite the expected hand-wringing that greeted the album’s release, it’s hard to argue that it didn’t draw more attention to than it would have gotten otherwise. Here’s what “U2” mentions look like on Twitter, according to Topsy, for example.

But don’t tell that to all the people grumbling about it online. “How could the band be so stupid as to believe anybody would actually play their music, especially the 500 million it was pushed to?” asked Lefsetz. “Where’s the afterplan? Nonexistent.”

This U2 thing is interesting. Just another example of the cloud being powerful and people really not understanding it.

Some people think the move is so cruel

U2 can be a buzzkill

i was naked and vulnerable in the shower listening to songs on shuffle and it started playing the new U2 album i feel so violated by apple — Dan Howell (@danisnotonfire) September 11, 2014

A new low for the music industry?

(Morris Day and the) Time waits for no man

You know who should release a free album to a half-billion people to promote the Apple Watch? pic.twitter.com/8rMoTGFjpj