The 5 best real-time marketing moments of the Oscars 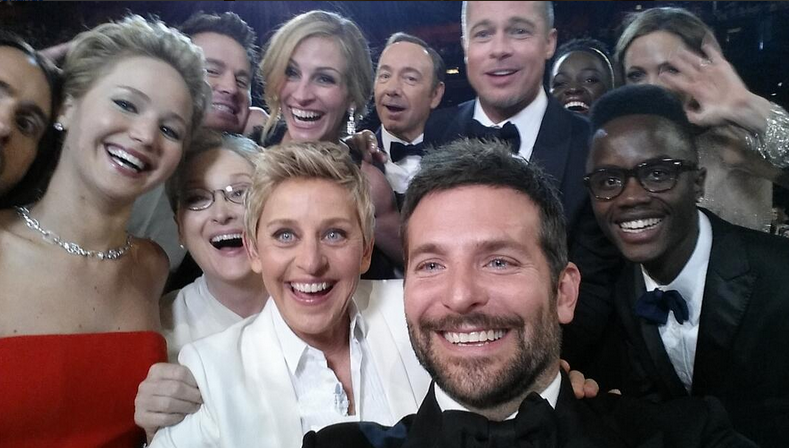 The 2014 Oscars are over. “Gravity” was hard to keep down, Jennifer Lawrence was her clumsy, lovable self and Twitter was lightly abuzz with real-time Oscar marketing. Digiday live-blogged the whole thing here, so read up in case you missed any crucial corporate pizza tweets. We’ll wait while you do that.

As usual, there were plenty of canned stock art tweets, corny puns and painful attempts to stretch anything into an awards tie-in. Finding the good wasn’t easy. Here are our picks for the five best real-time marketing moments at the 86th Academy Awards.

1. Ellen’s star-studded selfie
Ellen DeGeneres was a solid host — but her big moment of the night required a little help from her friends. DeGeneres  gathered a who’s who of A-listers from the audience around her — Angelina Jolie, Jennifer Lawrence, Jared Letto, Lupita Nyong’o and her brother, Brad Pitt, Julia Roberts, Kevin Spacey, Meryl Streep and Channing Tatum — snapped a self-portrait with them and promptly tweeted it out. Before the evening had ended, the selfie became the most retweeted photo ever — surpassing even President Barack Obama’s “four more years” tweet. DeGeneres had wracked up 2.5 million retweets by this morning and more than a million favorites — the tweet even caused Twitter to briefly crash. It was also a much needed boost to Twitter itself, which could use some more mainstream appeal.

You got this, Ellen! RT @theellenshow If only Bradley’s arm was longer. Best photo ever. #oscars pic.twitter.com/22E0oonzHA

2. Arby’s continues Pharrell hat buzz
Pharrell Williams’ much-buzzed-about Vivienne Westwood hat from the Grammy’s went up for auction in late February. In a stroke of lucky timing for the food chain, the auction wrapped on Oscar day — and guess who won. Pharrell thanked Arby’s in a tweet, which responded by wishing the Oscar nominee luck on his big night. The $44,100 that Arby’s spent for the hat will go to the charity. But Arby’s itself was the beneficiary of more than 6,100 retweets and more than 4,000 favorites.

.@Pharrell You’re welcome. We’re HAPPY to support a great cause & get our hat back. Good luck at the #Oscars tonight! pic.twitter.com/2oA7qDPX9z

3. NASA’s real-life gravity tweets
“Gravity” was awarded a handful of Oscars, and no brand was a bigger cheerleader than NASA. The space agency spent the night cleverly tweeting out real facts and cool images relating to gravity using the hashtag #RealGravity — totally on-brand for NASA. The tweets generated a good amount of engagement, like this tweet which got more than 8,100 retweets and more than 3,900 favorites.

Congrats on another win at #Oscars2014 #Gravity for cinematography. Here’s the #RealGravity – Earth from #ISS pic.twitter.com/CZHA2HZde9 — NASA (@NASA) March 3, 2014

4. Big Mama’s & Papa’s Oscar moment
The local pizza joint got major free publicity when Ellen decided to order delivery pizza for hungry attendees — regular folks like Brad Pitt and Harrison Ford. The pizza place tweeted out a simple thank you tweet to Ellen, which has gotten more than 460 retweets and more than 400 favorites. We’re guessing Big Mama and Big Papa will be fielding a lot more big orders soon. Oh and if they want some help with their real-time marketing efforts, MRY has offered its services.

5. Chobani threw some shade
Chobani prefers to keep its tweets as authentic — and its buzz as organic — as its yogurt. Rather than fawning over celebrity outfits and pandering to Oscar winners on Twitter, the Greek yogurt brand did a little sly anti-Academy marketing. It even used the trending #oscars hashtag, just to troll the awards show.