Online retail is a rapidly evolving landscape, and even the best educated forecasters can’t always keep up. That doesn’t stop them from trying: In the past, Forrester Research reports described the “shipping club” (loyalty programs for frequent online shoppers) as a hot new online market. It didn’t exactly pan out that way.

Now comes the latest round of predictions. Published this week, Forrester Research’s new five-year e-commerce forecast attempts to guess what the e-commerce industry will look like by 2019. One big projection: The e-commerce industry will top the $300 billion mark in sales this year and keep growing to nearly $500 billion by 2019 — a slightly faster rate of growth than what was projected by Forrester in a similar study performed in 2010.

The report, written by analyst Sucharita Mulpuru-Kodali, also forecasts which online e-commerce categories are fast growing, which won’t catch on, and the importance of omnichannel retail. Here’s a breakdown of predictions for the coming years — as well as an assessment of how accurate the rest of the 2010 report ended up being.

The $300 billion mark is approaching.
According to Forrester’s 2010 report, e-commerce wouldn’t become a $300 billion industry until 2017. However, the latest forecast shows that the industry is moving at a slightly accelerated pace, with sales projected to hit $334 billion in 2015. 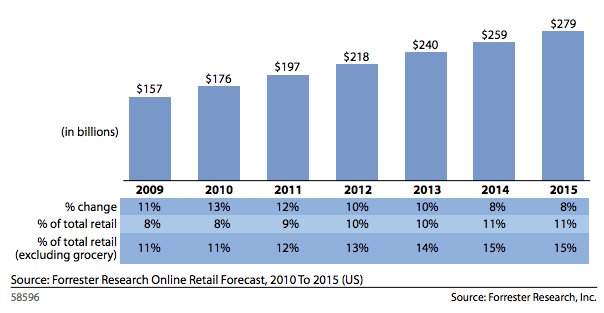 This is thanks to the online shoppers who have become more comfortable making larger purchases, like furniture and auto parts. These growth spots — which also include sectors like clothing — come after previous growth leaders in online purchasing have slowed. Those leaders, like media and software, haven’t gone back offline; rather, they’ve gone almost entirely online, leaving no room for expansion.

Mobile commerce will continue to surge.
Mulpuru-Kodali, who said that “as an industry, [retail is] never short on hype,” suggested that the tablet, same-day shipping and in-store beacons failed to live up to the excitement of five years ago.

In 2010, e-commerce was becoming ubiquitous, as shoppers spent time making purchases outside of the workplace and on their phones, tablets and gaming consoles. But in the years following, the tablet reached maturity as mobile commerce exploded — and still continues to grow. Mulpuru-Kodali said that the tablet was supposed to have gotten greater scale, but “it’s mobile that’s gaining strength.”

Same-day shipping and in-store beacons were much talked about at the beginning of the decade but, five years later, still have a long way to go until they hit their potential.

Flash sale sites fade, brick-and-mortars hang on.
Five years ago, flash sale sites were an emerging e-commerce model, having “generated excitement and grown rapidly,” according to the 2010 report; Forrester predicted that the sites, which sell designers brands at marked-down prices for a closed window of time, would become a main fixture in retail over the next decade.

Today, the flash sale model has shown that it’s quick to gain momentum, but difficult to maintain: Following a $1 billion valuation, Fab sold for a measly $15 million in 2014; the same year, Gilt Groupe was in talks to buy out competitor Rue La La.

Forrester also foresaw e-commerce cannibalizing in-store shopping, predicting that by 2015, 11 percent of overall sales would happen online. That prediction has proven accurate: About 90 percent of transactions are offline today. But the research firm didn’t see a current trend coming: the move from e-commerce-only to brick-and-mortar. Major e-commerce-only players, like Warby Parker and Birchbox, have recognized the value in a storefront and expanded their online presence to include traditional storefronts.

“I’m hearing from landlords that they’re getting a huge number of lease requests from these kind of companies that started as dot-com,” said Mulpuru-Kodali. Still, she doesn’t see this trend as easily scalable.

“There’s a bigger risk when opening a store rather than a website, but the reward of the online store is smaller than the physical store,” said Mulpuru-Kodali.