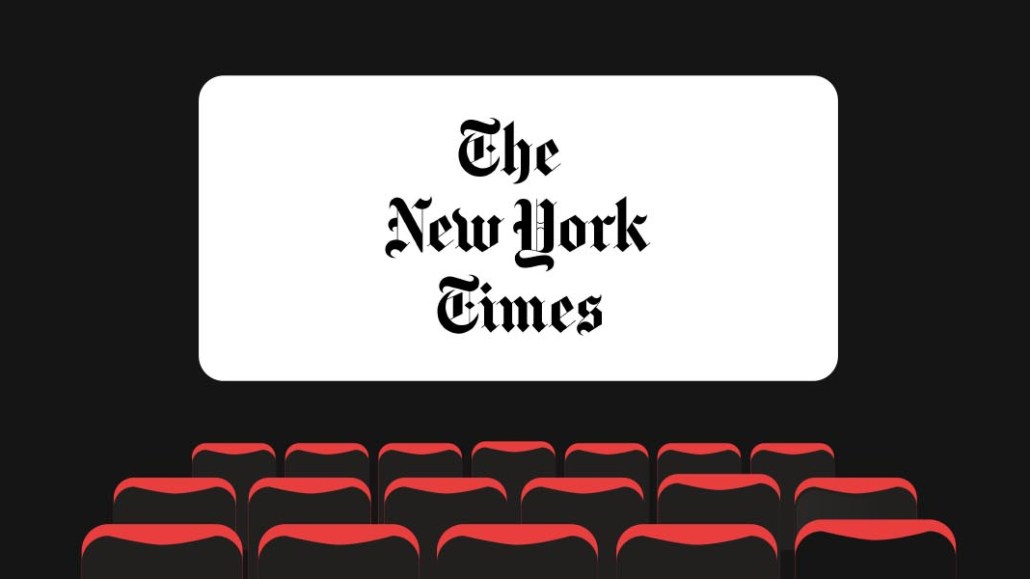 The New York Times is making a move into movies.

The publisher aims to premiere at least two feature-length documentaries in the first half of 2020. One of the films will be the Times’ TV unit’s first feature-length documentary directed by Times journalists and featuring Times journalism, according to a Times spokesperson. The documentary films will follow a slate of three shows that the Times premiered this year in an effort to round out people’s exposure to the publication. The move into producing shows and movies follows the Times’ foray into podcasting, all of which are meant to round out people’s exposure to the publication in hopes that these viewers and listeners will become readers and subscribers.

“Our whole interest in television is about being in the living room, a place where Americans are spending hours a day and have been for decades. Our business is a subscription business, but we care a lot about driving habits. When is more time of the day that The New York Times can get from you?” said Stephanie Preiss, executive director of TV and audio at The New York Times.

The shows have already given the Times’ business a boost. In its most recent quarter, they have generated $48 million in “other” revenue, a 26% year-over-year increase that was primarily attributed to “The Weekly,” its documentary series that debuted on FX and Hulu in June. Through 18 episodes, that show has averaged 1.2 million viewers per episode across linear TV, on-demand and streaming, according to the Times spokesperson.

It is unclear how exactly the Times’ current slate of shows has contributed to its broader business. Making a direct connection between the shows’ viewership and the Times’ subscription business would be difficult in the same way that advertisers struggle to know for a fact if an ad aired on TV led someone to purchase the product. The shows seem to have sparked more interest in the corresponding podcasts and articles published by the Times, however. Amazon’s scripted adaptation of “Modern Love” led to spikes in downloads of its podcast and readership of its column, said Preiss.

In addition to extending its existing audience’s exposure to the Times, its TV shows, which stream on Amazon Prime Video, Hulu, Netflix, offer an opportunity for the Times to expand its audience.

“Our research does show that the younger generations are using streaming services [and] social at higher rates than the generations that already have had a long history and understanding of what the Times delivers,” said Anne Hunter, evp of strategy and growth at Kantar.

Using TV to establish a presence in people’s living room mirrors how the Times has used podcasts to occupy a place in people’s cars during their commutes, said Melissa Chowning, founder and CEO of audience development agency Twenty-First Digital. Other media companies, like Vox Media and Axios, have similarly gotten into producing shows for TV networks and streaming services as a way to establish their brands on the biggest screens in people’s homes.

Whether the Times’ documentary films will make it to the proverbial big screen remains to be seen. Times execs declined to share many details of their plans for the films, such as how exactly they will be delivered. However, they do not view the move into movies as removed from the company’s move into TV, though it is removed from the digital videos that the Times’ separate video department produces for its site and platforms like YouTube, said Sam Dolnick, assistant managing editor at The New York Times. “What Steph and I are building up is now a new unit that’s making work aimed more at the streaming platforms, frankly. We don’t really make a distinction between TV and movies,” he said.

There is a distinction, however, between TV and other forms of media that the Times has adopted, Dolnick acknowledged. Like other publishers such as Vox Media, the Times has found TV to be an altogether other business. Like other publishers such as Axios, the Times has relied on outside production firms, such as Left/Right, to help steward it into the business while staffing up its own internal team. “I think we expected that TV would just be like one more step, but it feels in many ways like a whole other dimension,” Dolnick said.

For “The Weekly,” the Times has put together a story team that works with the show’s lead editor Jason Stallman and the rest of the publication’s newsroom to identify stories that would work in TV form. That team includes former Times columnist Dan Barry; Liz Day, who had been ProPublica’s director of research before becoming a senior news producer on HBO’s “Last Week Tonight With John Oliver;”; and Liz Baylen, a Pulitzer Prize finalist who had been the director of enterprise video at the Times.

The setup has different for the Times’ two other shows: Netflix’s adaptation of The New York Times Magazine column “Diagnosis” and Amazon’s adaptation of Styles column “Modern Love.” Preiss and Dolnick were both involved in the production of “Diagnosis,” and Dolnick served in a primarily advisory role on “Modern Love.” But the Times employees responsible the text versions were the ones more involved in the TV adapations, Dolnick said.

The documentary films, however, reside within the TV unit run by Preiss and Dolnick. Kathleen Lingo, who had run the publisher’s Op-Docs’ Oscar-nominated series of documentary short films, has been building a documentaries team that is producing series and feature-length films for “streaming channels, theaters and all the places that documentaries are seen,” Dolnick said.

Opposite Lingo’s unscripted programming work on the genre spectrum, the Times’ TV unit has the editorial director of the magazine’s creative studio NYT Magazine Labs Caitlin Roper working on scripted programming. She is meeting with producers, directors and screenwriters about the types of programming they are interested in and then digging into the Times’ archives to identify stories that could be adapted in projects. The Times has already produced a scripted show with “Modern Love” and has “a bunch of stuff in the early stages of development,” Dolnick said.

However, for as quickly as the Times appears to be building up its programming slate, its ambition is not to have “hundreds of television products and hundreds of movies or dozens of things set up in lots of different places,” Preiss said. Instead, the company intends to be strategic about the projects it produces, as it has been with “The Weekly.” While the Times is producing 30 episodes of the series, each of those episodes are “among the strongest journalistic projects” that the Times will undertake this year, Dolnick said.

This article has been updated to clarify that only one of the documentary films will be directed by Times journalists.