The NFL Flagged For ‘Pinkwashing’ 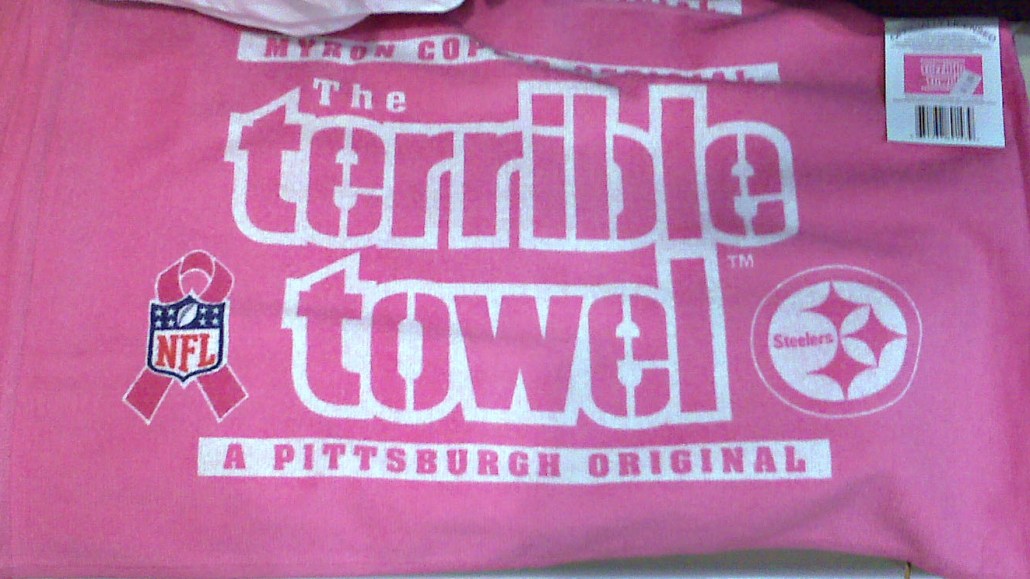 During Sunday’s NFL games, viewers were confused by the penalty flags. The flags, which are typically yellow, were supposed to have been pink for the entire month of October as part of the NFL’s breast cancer awareness program. So, too, were the players’ towels. This led to confusion: When a referee threw a flag, citing an infraction, fans and players didn’t immediately know if there was a foul on the field or if a player dropped a towel.

The NFL has apparently gotten the memo. In an email to USA Today on Monday, NFL vice president of football communications Michael Signora said that yellow flags would return next weekend as a result of the confusion. But the pink flags spoke to a deeper concern about whether the league is exploiting a good cause for its own benefit.

October is National Breast Cancer Awareness Month. It’s the time of year when we see pink ribbons appended to everything, from products to sporting events like NFL games. This year, in addition to the pink cleats, socks, gloves and sideline markers, there are pink penalty flags as part of the NFL’s own breast cancer awareness program, “A Crucial Catch.”

Going pink has become a good way for brands (the NFL partners with Nike, Gatorade and New Era, too) to raise their philanthropic image on the one hand, and sell pink-dyed paraphernalia on the other, all ostensibly in the name of saving lives. But it may have gotten out of hand. The non-profit Think Before You Pink which claims to be the “watchdog for the breast cancer movement,” bewails what it views as the commercialization of cancer. October, they say, has become “Breast Cancer Industry Month.”

Where exactly does raising awareness tip into exploitative “pinkwashing” – the act of associating your organization with a good cause for ulterior, even questionable, motives? According to an article by Sports on Earth, while “A Crucial Catch” is meant to raise awareness and funds to fight breast cancer, “research suggests that the NFL and its corporate partners are more concerned with enhancing their public images — especially among women — and ultimately revenues” than they are with fighting breast cancer.

The numbers do all the talking. In the four years of the campaign up until 2012, the NFL contributed only $4.5 million. The league donated $1.5 million, just .01 percent of the $9 billion the league made last year. A Business Insider article from last year found that for $100 in pink sales, only $3.54 goes toward research. The NFL gets $45.

During yesterday’s games, people weren’t shy about tweeting their concerns over the NFL’s pink blitz. For example, fans like Christina Holt tweeted that “as a survivor, I find excessive pink washing offensive.” Scott Griffith tweeted that instead of buying pink gear, people should donate their money to “legit cancer charities.” And Chris Harris tweeted that he’s “hoping we cure breast cancer soon, if only to end the NFLs cynical ‘pink washing’ campaign.”

There’s no question that breast cancer is a worthy cause. It afflicts 232,000 women a year in the U.S, according to the American Cancer Society. So it’s a shame – for breast cancer research and the NFL itself – so many fans are increasingly annoyed. “If they’re questioning your philanthropic partnerships, will they question you when a bigger question comes up, like safety issues related to concussions, or even collective bargaining,” said Dan Webber, vp at Edelman.

Then, of course, there are some people who will never be swayed.

“I don’t know why the NFL has to remind women to get breast exams at all. I can’t turn on a football game without wondering how many players on the field have, at some point in their anointed athlete youth, creepily groped a woman’s breasts,” wrote Jezebel’s Erin Gloria Ryan. “Oh yeah, I think as Ben Roethlisberger drops back to pass, mammograms.”

Still, there’s something to be said for even one life being saved. The NFL is running TV spots during games from one Jets fan who says she got a mammogram after seeing pink all over the place while watching a Jets game. The test revealed cancer, and the early detection saved her life.

“When you turn on the TV and you a see pink penalty flag, someone’s making decisions to embrace [the awareness campaign] more and more each time,” Edelman’s Webber told Digiday.

“If they’re starting to see criticism about it, it would be a great opportunity to engage and talk about what they stand for. If there are questions, address it now before it comes out of proportion.”