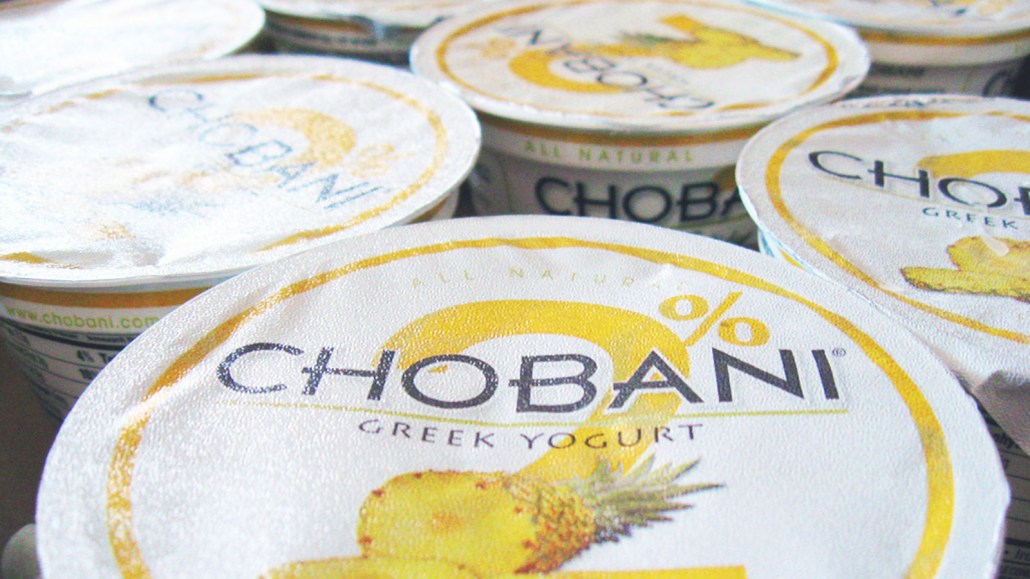 Chobani is blowing up. Literally. And in the process, the young, fast-growing brand is showing both its strengths and weaknesses in handling a crisis.

At the end of August, the Greek-style yogurt company began receiving complaints that certain containers of its yogurt started exploding. On Aug. 31, it notified grocers to take yogurt with a best-by date of Sept. 11 – Oct. 7 and a code of 16-012 on the containers off the shelves. On Sept. 3, it revealed that a common mold species, mucor circinelloides, was found in its yogurt and announced a broad voluntary recall.  More than 200 people have complained to the FDA with reports of cramps, nausea and diarrhea. Since then, the company has been in full-on crisis mode.

Peter McGuinness, the company’s new chief of marketing and branding, said Chobani’s crisis response is reflective of the broader culture of the company. McGuinness told Digiday that the company’s messaging is rooted in being approachable, accessible and conversational.

“Look, if people aren’t happy, you have to be accessible and approachable and conversational and treat them like humans,” McGuinness said. “If you’re not happy, let us know. We care you care enough to tell us you’re not happy with us. We take it personally. We’ll communicate with you in an approachable, accessible, conversational kind of way as a friend, as a fan, as a human, not as a big company. That’s what we tried to do.”

They didn’t always succeed. According to the Wall Street Journal, Chobani was overwhelmed by all the inquiries of the spoiled yogurt. Nicki Briggs, the company’s head spokesperson, told the WSJ it dropped the ball on training people in crisis sooner.

“I would have loved to have done that sooner,” Briggs told the Journal. “This is the first crisis the company has ever gone through. … In a typical week, we might see a couple thousand emails; now we’re seeing multiples far greater than that.”

Chobani has seemingly come out of nowhere to take the yogurt industry by storm. In Chobani’s case, nowhere is New Berlin, N.Y. Since starting it 2007, it has led a surge of interest in Greek yogurt. It is now a billion-dollar brand, forcing mainstays like Yoplait and Dannon to play catch-up on the Greek-style craze.

Chobani has 66,000 followers on Twitter and 835,000 likes on Facebook. And while it pumps out tons of social content (it tweets about 60 times a day), since the recall announcement it has gone dark on new content on both channels. During the crisis, its Twitter feed has driven customers to a blog it developed to keep people updated.

It’s last non-reply tweet was on Sept. 6 (though it has been furiously tweeting replies to those who tweeted to the company about the recall):

“To my mind, keeping quiet until the problem is solved suggests the brand is trying to show they’re making this issue their top priority,” said Thomas Siebert, vp of communications at Digitaria, a JWT company. “I’m sure they will have their critics about responding too late to the spoilage, but I think they’re showing the proper amount of gravitas and focus on the social media outlets.”

Whereas other companies use social media as a customer support center or as a crisis management tool, Chobani has typically used it as a platform to amplify its fans. McGuinness said this has allowed for a closer relationship between it and its customers, which is a differentiator from its competitors.

“We want people to engage and get in,” he said. “It’s always been about authenticity and transparency.”

In 2011, when the company ran its first major TV spots, it chose to do a campaign of real love stories from people who would post their affinity for the yogurt on the brand’s Facebook and Twitter pages. For example, the star of one ad is a real Chobani customer who would hide her yogurt in the office refrigerator after co-workers kept stealing it.

Chobani will take its messaging to advertising channels next year, so how it handles the current crisis matters. While the company has historically cared more about its social presence than its advertising (it only started running major TV spots two years ago), McGuinness said that it will double its spend in both traditional and digital advertising in 2014.

“When you’re building infrastructure and are sold out due to demand, advertising can come and go in its importance,” McGuinness said. “Chobani will shift from a manufacturing-centric to manufacturing-plus-brand-centric factory.”